Art’s Advice – It’s All About that Bass! (Apologies to Megan Trainor) 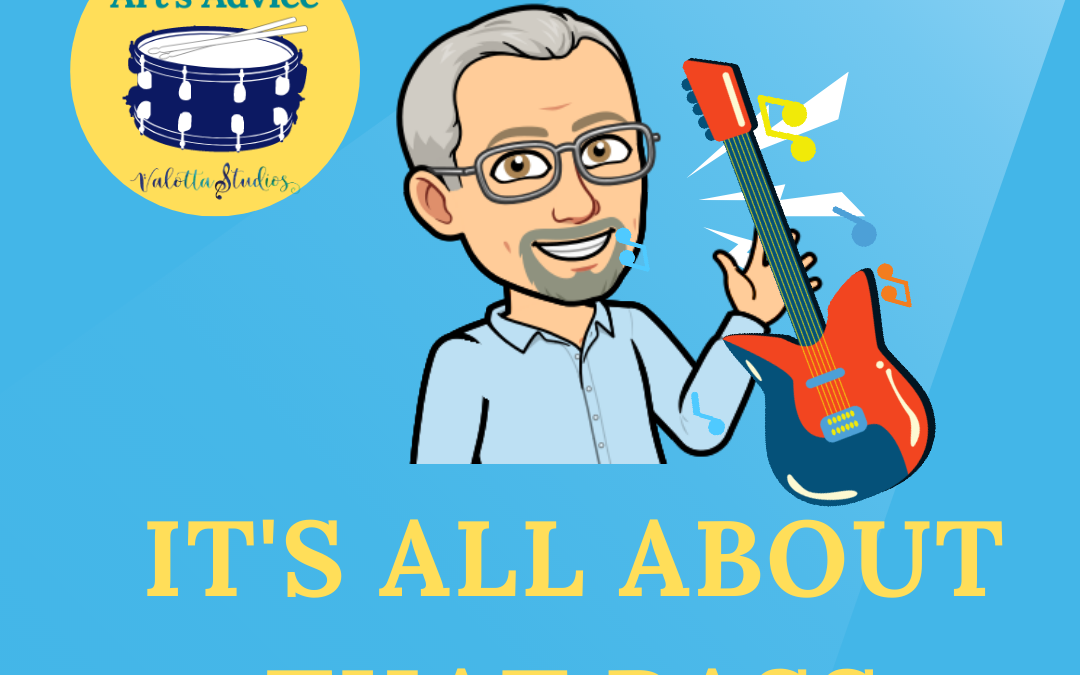 In my last blog I talked about my experiences as a twelve year old and my first year as a percussion student. Percussion was my first entry into the world of instrumental music, but it was not destined to be my last. As my interests in music expanded in high school, so did my desire to try new things. One was joining the school’s choir my junior year and another was trying the bass guitar (aka the bass or electric bass). While continuing formal percussion lessons, I decided to purchase a very inexpensive bass and amplifier also in my junior year. I thought “how hard could it be?” I was already acquainted with the six string guitar which my sister was learning. This was destained to be her 3rd instrument tried just to be lost, this time over her new craze called horse back riding (but I digress). The four string bass is the same string pitches as the last four strings on a regular guitar, but much lower. So I took my new instrument home and began plucking out the bass parts to my favorite rock tunes. Since my ear training was only good enough at that time to figure out easy rock tunes with repetitive bass parts, I began to buy piano transcripts of rock songs to help me learn more complicated bass parts. Piano music utilizes both the treble clef staff and bass clef staff in an arrangement known as the “grand staff.” It was through this process that I learned to read bass music. Soon after, I volunteered to play the bass in the high school jazz band. So without taking any formal lessons, I had taught myself the essentials of playing the bass. While it was possible for me to learn the bass on my own, I later had wished I had taken formal lessons for the bass. This would have made it less frustrating to learn more intricate forms of rock, jazz, and the blues.

Another observation that I made was that among the plethora of high school aged “garage” bands in my area, they all had drummers but some did not have a bass player! It just didn’t seem that important to them. It appeared that they could get by without a bass. Some bands would simply substitute the electric keyboardist’s left hand (lower) parts for the bass. No one seemed to notice. However when I saw a band with a bass player, I could really feel the bass part. Feeling the bass frequencies through a sound dedicated solely to that range of the sonic spectrum is what sets the bass apart from the other instruments in the band. Playing bass in a rock band was my next goal. Now I was going to be able to declare myself as a really cool guy! The girls would b, right? Haha not really, but I did become the guy the girls would go to for the guitarist, drummer, or lead singer’s phone number! Anyway, the bass became my second love after playing percussion.

So what is it about the bass that is so exciting and important to the sound of a rock band, jazz band, reggae band, ska, metal, even many rap groups? It is the lowest sound of the rhythm section of any of these musical genres. What is a “rhythm section?” The rhythm section is the component of a band that is primarily responsible for the background behind any primary performer like the lead singer, brass section, lead instruments (i.e. lead guitar), or soloist. The make up of a band’s rhythm section can vary depending on the genre of music, but is usually comprised of the drums, keyboard, and the bass. While any of these instruments can become a lead instrument at any time, their primary functions are to provide the musical “landscape” of the ensemble. So what was it about the bass that I loved so much? It was its overall importance to the sound of the band. It is one of those instruments that a listener might not notice right away, but they would notice if it was not there! Another aspect of the bass that I grew to love was its nearly symbiotic relationship with the drums, specifically the bass drum or kick drum component of the drum set. Not all bass players can grasp this concept, but it is essential to the makings of a cohesive band sound. As I was already a drummer, it was fairly easy for me to analyze what the drummer was playing, and lock in to the sound of the drummer’s bass drum. What really can set a good or great band apart from a decent or mediocre band is if you have both the drummer and the bass player who are actively listening to each other’s parts simultaneously! A connection begins to develop described by musicians as playing “in the pocket” of the sound. This really allows the singer or soloist to be creative, because they are confident that the rhythm section will be spot on with their part of the performance.

So the next time you see a band, give some love to the bass player. They were likely the reason that you had such a good time, even if you didn’t realize it!