Art’s Advice – Percussion or Drums, That is the Question! 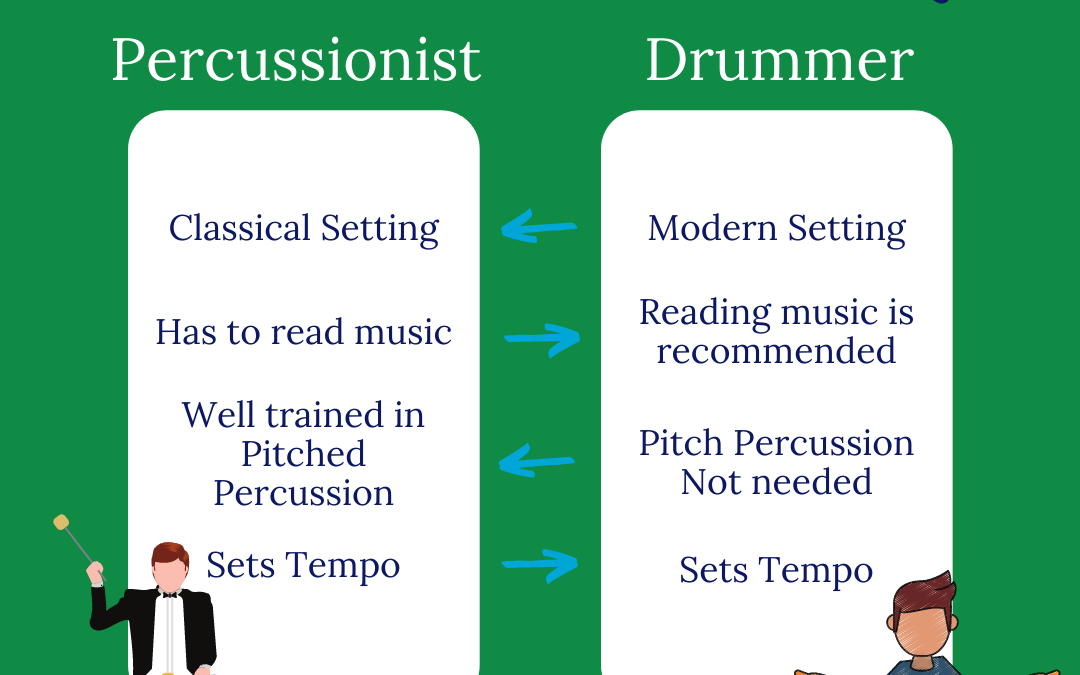 Percussion or Drums, That Is The Question

When I was 12 years old, my mother said to me:  “I want to ask you an important question.  Your sister has already been through two musical instruments (piano and violin), and now I think it’s time you pick something to play.”  We were in the car and I was sitting in the back seat, so I couldn’t tell if she was being serious about choosing the  instrument.  I’m fairly confident that she held her breath waiting for my answer, hoping that it wouldn’t be the drums.  True to form, that was exactly what I said!  It didn’t occur to me at the time that she was going to schedule me for “percussion” lessons, nor would have I realized the ramifications.  You see, I was infatuated with the drum set.  The way that one person could play all those separate instruments (several drums and cymbals using both hands and both feet) simply fascinated me.  This reminded me of Dick Van Dyke’s character in “Mary Poppins”, complete with his one-man-band apparatus.

So what was I actually getting myself into?  In my head I was going to be Ringo Starr, but my teacher said we were going to play on a practice pad! In my head I was like “What??”  So week after week, we would go over my snare drum technique exercises from my book while longing to sit behind my teacher’s drum set.  When, I asked, when? He would always say soon!  Finally, he let me play my snare exercises on the drum set.  What a thrill!!  But what did it really mean beyond the extrinsic opportunity to play a real drum set?

Ok, not exactly the same thing but still cool!  A drum set is comprised of several percussion instruments (as mentioned), and can come in something as comparatively simple as Ringo’s classic Beatles set to the recently departed drummer Neil Peart’s of the rock band “Rush.”

It all depends on what the drummer wants to do as a member of a band.  The basic premise is that a drummer provides the steady beat percussively and sets the tempo (speed) and the style of a song (rock, jazz, reggae, etc.).  So what does a “percussionist” do that a drummer doesn’t do?

The percussionist in a band, orchestra, or any variation of these performing groups, must be much more versatile than the average drummer in a rock or jazz band.  A percussionist is more classically trained and reading music is an absolute must, where as reading music is optional (though very helpful and always a part of our lessons!) for the set drummer.  In addition to being at least competent on a drum set, the percussionist must also be well-trained in playing several other pitched and non-pitched percussion instruments.  Some of these include: Tympani, the mallet instruments (xylophone, marimba, vibraphone, chimes, glockenspiel, etc.), crash and suspended cymbals, wood block, temple blocks, triangle, claves, congas and bongos, claves, (and yes, the cowbell!), as well as anything else the composer wants in their masterpiece that needs to be hit, struck, shaken, or rattled.  You can ask a clarinet to play a wood block, but likely their hands will already be busy at the time!

So where a set drummer is very important and drives the beat of a band, a percussionist does the same and much more in a larger setting.  I was extremely privileged to have been  taught by a well-rounded percussionist.  He gave me the background that enabled me to not only play nearly anything called on in the percussion section of my school band and orchestra, but also the basics to explore the many uses of the drum set which was my initial motivation to wanting take drum lessons in the first place!