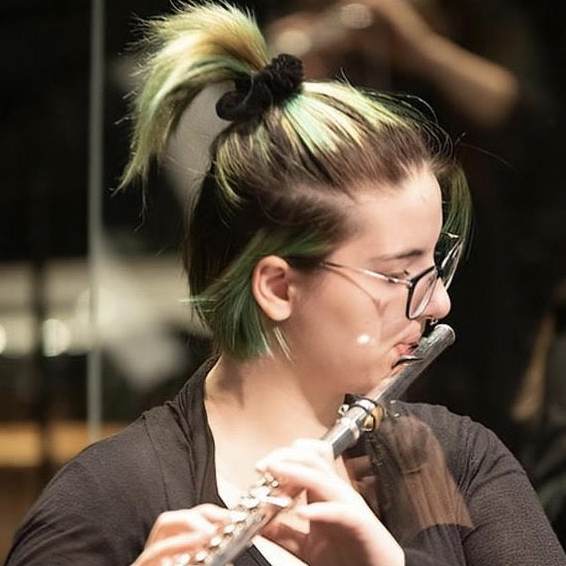 Analiesia Hall is currently pursuing their B.M. in Flute performance as well as taking minor lessons on piccolo. They are originally from Horsham, Pennsylvania. They started playing the flute at age 11 and have been taking private lessons since the age of 14. In high school, they attended PMEA festivals and performed in their schools marching band, concert band, orchestra, jazz band, and wind ensemble. They have participated in 10 marching seasons, 8 outdoor marching band seasons on flute/piccolo and 2 indoor percussion seasons on cymbals. 2 of those marching seasons were with the Incomparable Golden Rams Marching Band at West Chester University. While at WCU, they have been apart of the Wind Symphony, Symphony Orchestra, the Trilovati Flute ensemble, as well as 2 student run small ensembles; The Little Lyre Flute Quartet and a chamber woodwind quintet. They have been awarded the Council of Trustees Scholarship and The Ready for Success scholarship at West Chester University. They have been on the Dean’s list at WCU annually and are a member of two musical Co-ed fraternities at West Chester University.

Analiesia’s teaching style is still growing and evolving, but centers around being genuine and grounded. They want to encourage their students to make practicing at home an enjoyable process. They believe music is an individualized practice and wants their students to leave the lesson room feeling empowered to take charge of their own learning and practicing goals. While in the classroom, they focus on giving positive and reaffirming feedback. They are thrilled to be teaching at Valotta Studios!