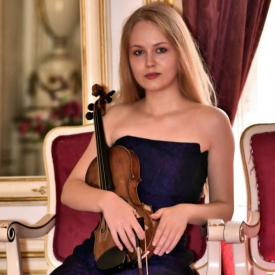 Born in Los Angeles, California, Eliza began her violin studies at age 6. In 2004, she studied at the Central Music School in Moscow where she performed at the Kremlin museum twice. Later on, she was accepted at the Curtis Institute of Music in Philadelphia at 12 years of age and took masterclasses with world-renowned soloist Ruggiero Ricci in Palm Springs. Eliza moved to Vienna, Austria and then continued her studies in Asia. She performed multiple tours in Germany for several consecutive years. She premiered with the Paganini Concerto No. 4 in Germany (the live recording now released by JPK Musik) and Bruch Concerto in China.

Elizabeth recorded the majority of the violin score for the documentary, “Paul Mellon: In His Own Words”, which premiered at the National Gallery of Art in Washington. She also volunteers for the FSP: Fifty Shades of Purple Against Bullying, a non-profit organization that stands for resilience and community support. She also enjoys farming and has volunteered at a cob-building project.

Elizabeth can be personally reached at Elizabeth.ValottaStudios@gmail.com