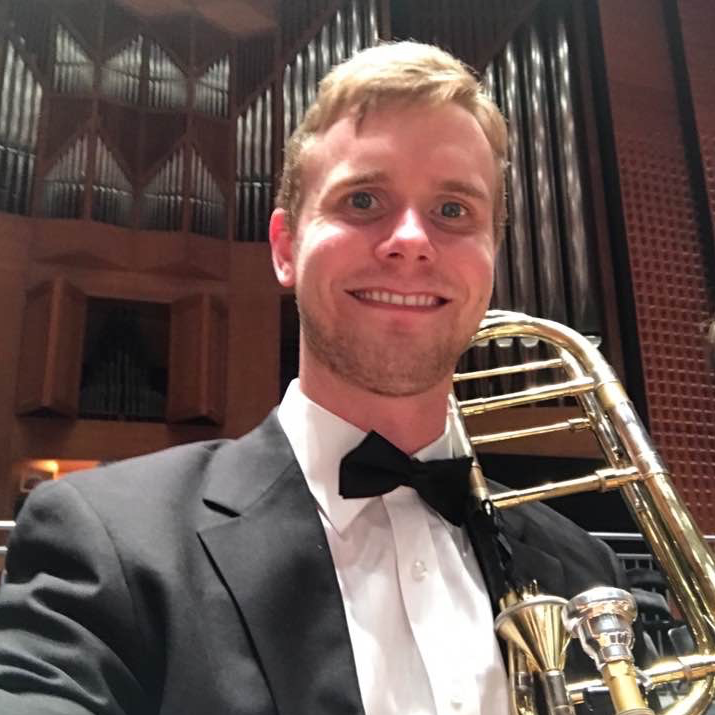 Matthew was raised in Hudson, NH, and started playing trombone in the sixth grade. Being the only one in his family who played music, he found more and more interest in trombone through private lessons. In high school, he auditioned into the NHMEA Jazz All-State Honors Jazz Ensemble as the lead trombonist for his Sophomore, Junior, and Senior years, and also made the top Trombone chair in NHMEA All-State Concert Band for his Senior year. Matthew’s love of teaching music was fully realized after becoming the Drum Major of the Alvirne HS Marching Band, so he decided to major in Music Education at Ithaca College in NY. After earning a Bachelor’s in Music Ed., he then traveled to Texas Tech University in Lubbock to pursue a Master’s in Trombone while working as the Graduate Teaching Assistant for the Music School’s Trombone Studio Professor. At TTU, Matthew met his Fiancee, who is currently studying Music Therapy at Immaculata University.

Matthew has been teaching private music lessons of all instruments, but especially trombone, since he was a student in High School. He loves playing and working in all types of music, especially jazz, classical, and rock, and considers all of these when teaching students.

Matt can be personally reached at Matthew.ValottaStudios@gmail.com

“Matt has been great for our son! He loves that Matt not only teaches him to play, but also teaches him the theory behind what he’s playing so he understands the music better. They’ve been working a lot on jazz theory which has helped my son to hear all the parts of the marching band music (the show was Earth, Wind, and Fire) and to help his section with their parts (he’s the trombone section leader). Matt has also helped my son with his playing technique. He made district 12 band and orchestra last year as well as PYO and is now considering pursuing music in college, even reviewing repertoire and auditions with Matt this semester. Matt also sends an email home each week with the assignment to practice and links to great performances to listen to. Not only is Matt a great teacher, he is personable and gets along well with my son, and he really enjoys his lessons!”